The Diary of One Boy's Year at the Conspiracy 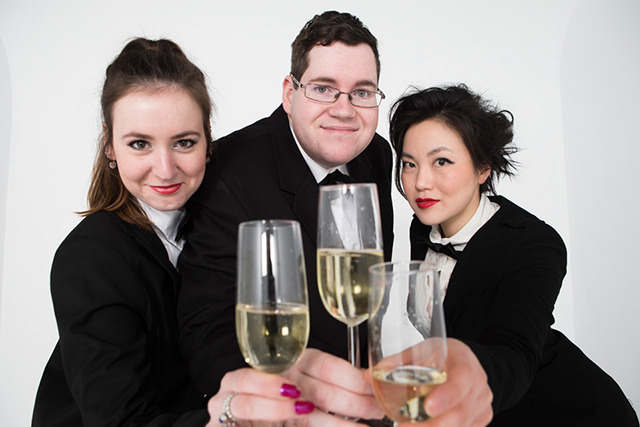 Conspiracy Member Mike Brown (center) has been improvising with The Improv Conspiracy for exactly one year. He kept a diary of his experiences and would like to share it with you.

Sign up to take a Level 1 workshop with The Improv Conspiracy. I figure it would be a good way to get more comfortable interacting with strangers - I'm good with my close friends, but quite timid once that circle expands. At worst, I'll run into someone I can talk comedy podcasts to - surely someone else listens to improv4humans?

First L1 class has just finished. Andrew, the teacher is jovial, energetic, and in-your-face. I'm really nervous before, during, and after class. We do this activity called Alien Soul-Mate where one person jumps into a circle performing an action and a noise. A second person joins them taking on action and noise, then transforming them into a new action and noise. People in the class were laughing but I'm not sure what they're laughing at. We do a bunch of other activities, the names of which I forget but it's clear that there are two groups of people in class - the actors and the act-nots. I'm in the latter.

Still getting nervous before class, but when we get in we "shake it out" and those nerves dissipate. Do a scene with James based off the suggestion salt. I'm eating a meal and James is a waiter. I ask the waiter for a drinks menu and he recommends the salt scotch. I struggle not to laugh at the absurdity of salt scotch. The scene ends up being about my character's struggle with a heart problem and ends up being the first scene where I come away thinking "I'm not completely horrible at this." [Postscript Note: Almost a year later, "salt scotch" still makes me laugh].

Andrew urges us to all go down to the pub after class, and a few of us make it along. I find out that I'm the only person without a performance background - everyone else has either taking previous improv courses elsewhere or acting training. I have no performance ambitions - I am curious about how improv works because I enjoy comedy, but that's about it. The last time I performed was when I took drama in Year 8. Blerk. But that doesn't matter - the people in my class are warm and welcoming and I enjoy the experience.