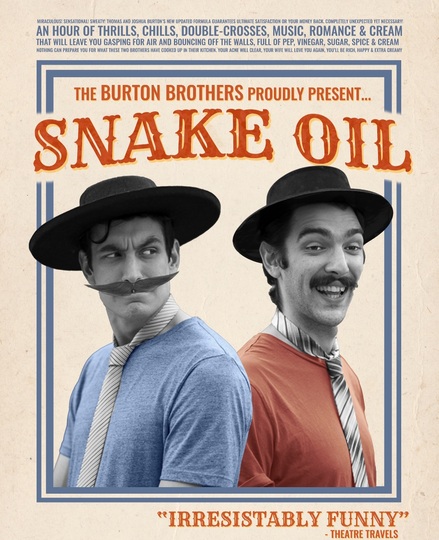 Do you suffer from an ache that ails you or a maddening malady? Do you feel like a chunk of rotting butcher’s meat that’s been ripped apart in the sweltering heat of the day by hungry dogs?  Then look no further than the miracle cure we have for you. Two brothers performing sketch comedy. It will make you laugh, make you cry, put a pep in your step and some fuel in your mule.

Coming hot off a debut run at the Adelaide Fringe Festival, Snake Oil was met with critical acclaim and sell out shows. Weekend Notes says “Their writing is clever and their sketches are hilarious”, “an improvisational riot” and “If you have a brother, sister or even a close mate, you should check this out!” Written and performed by Josh Burton (Impromptunes, The Completely Improvised Musical) and Tom Burton (It’s Talkie Time With Jackie Lime).