Jayden Masciulli took The Improv Conspiracy's Level 1 Intensive course in January 2015. He was gracious enough to write an article about his experiences!

"YES, AND... WHAT THE HELL AM I DOING?!" - MY FIRST WEEK OF IMPROV
By Jayden Masciulli 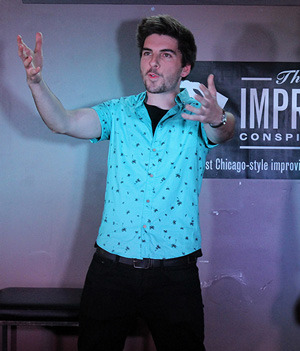 I signed up to The Improv Conspiracy’s Level 1 intensive workshop on a whim. I had only been to one Harold Night, and while I loved every manic second of the show, it never really occurred to me that I would - or could - actually do it.

Maybe it was the liberating feeling of graduating from uni a few weeks earlier. Maybe the haze of New Year’s resolutions got the better of me. Maybe I was drunk and looking for new and creative ways of embarrassing myself in public (actually, that was the exact reason. It was New Year’s after all). Regardless, when I first spotted on my Facebook feed the ad for TIC’s upcoming workshops, a little part of my brain fired up – the part responsible for my irrational need to make others laugh, and my ability to absolutely nail 21st birthday speeches on cue. Maybe I could do this.

I had no idea what to expect on the first day. All that self belief I had when I triumphantly typed my credit card details online had vanished. I’m not an actor. I’m not a fan of being the centre of attention. I’m not even that funny. What the hell was I doing?

But suddenly there I was, pretending to be an alien, washing an imaginary car and letting fifteen random people listen in on a conversation about still living at home with my parents. All in the first hour. THE FIRST HOUR.

All of this embarrassment does something to a person. There’s nothing quite like spending two full minutes in front of a group of strangers, screaming horrifically at a chair. I’ve learned that mutual humiliation binds people together, and any initial awkwardness there may have been between the ragtag bunch of students (shout out to my fellow kitchenhands) quickly disappeared. It didn’t matter that we were all of different ages, backgrounds, experience and accents – suddenly we were a team, and the support, openness and, above all else, laughs I got from everybody made the whole experience worthwhile. They’re the reason I’m chuckling to myself as I type the words ‘chicken carcass tea party’. Shared embarrassment: try it next time you’re stuck in a lift and see how many strangers you can befriend.

They don’t call it an intensive for nothing – ‘intense’ is probably the best way of describing those four days of constantly making shit up. It’s hard! It’s emotional! It’s hilarious! It’s humiliating! It’s terrifying! It’s fun! It’s like your mind has an over abundance of exclamation marks!

And then there was a show! An actual performance! With spotlights! And paying audience members! And a guy on a piano! And even more exclamation marks running through my mind! I won’t lie, I was terrified– not even the pre-show warm up with my class in the park across the road involving singing and being a statue could shake it off. But, once again, I was suddenly on stage, this time as an armless cannibalistic Japanese chef and everything felt right in the world. Plus watching the rest of my team take their skills to the absolute NEXT LEVEL on stage was incredible.

I can’t speak highly enough of our two coaches Broni and Ellyse, so I won’t. They’re hilarious, talented, passionate, supportive geniuses and I’m sure they don’t need to be constantly reminded of that fact.

I learned so much, and I couldn’t recommend this course highly enough to anybody even remotely interested in doing improv. It’s helped me immensely in so many ways – my self-confidence, writing, comedy, social skills and the ability to dust an imaginary room while simultaneously threatening to murder the person next to you. In one week I’ve been a bitchy teenage girl, a lasagne-obsessed 50’s gangster, a middle-aged lesbian, a wide-eyed boy with an evil imaginary friend, a French cheese maker, a meth-taking criminal with an affinity for board games and an asshole who booked his wife a Contiki tour of Bali for their honeymoon.

They always say we regret the things we didn’t do, and I can honestly say I have no regrets about leaping into the weird and wonderful world of improv. I encourage anyone with the same nagging, potentially damaged part of their brain that thinks they can do it, to just jump right in and never look back.

Interested in taking a workshop with The Improv Conspiracy? New 8-week terms of classes begin every two months throughout the year. Intensive courses run during uni holidays. Find out more on our workshops page.