Stage 4 Restrictions COVID-19 Update: Due to reintroduced restrictions, we've been forced to postpone ALL improv classes until further notice. We will be in touch with affected students via email. We'll be converting listed in-person sketch comedy classes to online versions, and adding additional classes where possible. There are no shows running at the theatre.

Jayden Masciulli is an Improv Conspiracy student currently in our Level 5 Intermediate Harold class. He previously blogged for us back in January after he finished his Level 1 Intensive course. 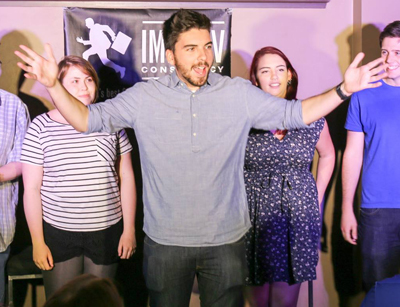 Not only when I step out to do an improv scene, but pretty much every day, in some way. I get nervous before I visit my grandmother, because I’m not sure if I can carry a conversation with her on my own. I get nervous around my little cousins because I honestly don’t know how to act around children. I get nervous ordering food at a restaurant because I’m worried I’ll pronounce "biryani" wrong and the waiter will laugh and make me repeat it again and again until I’ve offended everybody in the room. I realise now as I write this that these are all highly specific social situations, and are ridiculous. Not even my good friend Dr. Google has any idea what to call this condition.

Naturally, I’m easily petrified when I do improv. It’s one of the many reasons why I started taking classes in the first place – to bust out of my self-constructed, albeit very comfy, shell. I know nerves are a bit of an ‘everyone’ problem, but for me it’s always been my biggest pitfall. They stop me from committing to characters, they block my listening of other scenes and they make me go completely, utterly blank. I’ll always remember fumbling my way through my first Jam to an audience of roughly seven people and coming off stage with a dizzying head rush as if I’d just stepped off of a rollercoaster.

But hey, I’m working on it! My previous life examples show that I’m not the most carefree dude going around, and improv is easily one of the most unnatural things for me to do. But I keep doing it, because I love it, and it helps me.

I’ve been back in classes now for about five weeks. I was gallivanting around the world for a bit, then slotted into Level 5 and a Musical elective after close to four months of not improvising. Safe to say, I was a wreck. Old fears and insecurities resurfaced, and I doubted myself more than I reasonably should have. But I kept/keep doing the thing. Recently I sang a song completely on the spot about returning home to New York City moments after rising from the dead, and spent another scene loudly screaming at my homophobic grandfather for two whole minutes. (These are examples from improv scenes I did in class by the way; I’m not an angry American zombie.)

A few weeks back, I did my first two Harolds in front of an audience and it was probably the best improv I’ve ever done. I also did my first Cage Match and it was definitely not the best improv I’ve ever done. But both times I felt the nerves slowly melt away, and all that was left was the joy to be had on stage. It’s a little Facebook-motivational-quote-y, but it’s the truth. It didn’t matter whether I got a character’s name wrong or went in for the obvious joke or even said nothing at all, because I was, at last, having fun. My teachers might say otherwise.

I’m finally feeling more confident in my work, and it extends far beyond just improvising. I’m having a go at writing sketches, I’m working on some stand-up material and my conversational skills with customers at my dull retail job have vastly improved. I think being more confident is a good thing, but I’ll let you know if everything comes crashing down.

I can’t offer any advice about how to handle nerves without recycling what’s already been said. But from one nervous wreck to another: give it time. There’s a reason why everybody keeps telling you to just ‘do the thing’. So keep doing it!

« Previous: Community Action Next: The Void Laughs Back: Nietzsche and the Church of Improv »