Being repeated (from someone who knows) 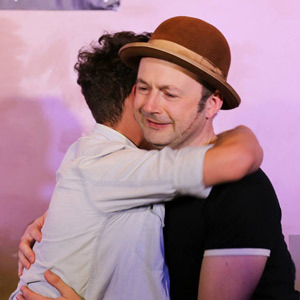 Your end-of-term performance is done. You think you rocked it, though there were some problems, but ah well... the other student performances going on in front of you seem to meander to the background, as in your head, you're busily replaying and analysing every move you made. It's an unyielding internal debate, and standing at the opposing podiums are Uncertainty and Satisfaction, while the person getting drunk in the stands provides a welcome distraction. Over the next day or two, you're coming down off the high. Then, the email arrives. The heart sinks. Imagined future scenarios get much darker. You've been repeated. At that very point, the reasoning and attempts to comfort seem irrelevant.

I once murmured to someone when I first started improv at the Conspiracy that it'd be good to do every level twice, since you could (back then) start Level 1, and top out of Level 4 in 36 weeks. That is a very short period of time to learn a lot. It seems that, for me, this idea is becoming reality, and not of my own choice. I have been repeated once each for Level 1, 2, and the new Level 3. There's a small subset of people who know what it's like to experience a slower growth than their peers. These are the people who have stuck with it, who see more in it than the sting of the results, who didn't crack it and give up, and who come back time after time. It'd be naive to assume the experience is the same for everyone, it seems that no two improv journeys are ever alike. Though, I will share with you how it has been for me.

It has been a see-saw between enthusiasm and disillusionment. The buzz of the end-of-term performance is the high of the see-saw. It feels great to feel that some learning has cut through to the stage. Unfortunately, the result comes jarringly soon after that. Then, the plans of starting an indie team, assumptions about my place in the community, even plans to continue, all now come under question. It is the low point of the see-saw. It is the end-of-term, and everyone is super loved up having shared some intense experiences. Then, it feels like you have to say goodbye to them as they ascend. Luckily, this feeling is short term. A levelled out attitude is a few talks with some very supportive people away. Find those people if you haven't, they're worth their weight in gold.

The point that I have to admit is that, so far, these decisions have been the right one for me. The way I can tell is in just how much I have got out of each repeated term. Because of this, I am an advocate for anyone repeating any level. One reason is that there is a lot to learn. I regard each lesson as a glimpse into the required skills, and certainly not an all-you'll-ever-need downloading of talent. It takes practice, and practice that is hard to get outside of class. Admittedly, my level of practice outside of class has been the occasional jam, and that's it. I know some people can get away with less, but let's face it, the ones who do well seem to never be anywhere else than The Improv Conspiracy, are reading improv books and blogs, watching improv or any other comedy, and have an obvious hunger. One must be very honest with ones self when judging what result is fair; just because X, Y, and Z got through with doing naff all doesn't mean you deserve to as well.

Another very good reason for repeating is that the more teachers you get exposed to, the greater breadth of knowledge you're likely to have. Out of the 5 terms I have done so far, I have had a different teacher every time. This has been great, as each one can talk about each aspect differently. Even with the same curriculum, there are differences, each contributing to a more rounded awareness of what is needed.

Like in any endeavour where people mature at different speeds, it is incredibly hard to see people you've connected with leave you behind. It's isolating, and pushes a lot of dark social buttons. I find this the hardest part. The optimistic line of, “You'll have more friends to play with from your new group,” has never worked out for me, and is not particularly helpful I must say. My particular personality is one of confidence with tasks, but shyness and distance with people, even though I do really enjoy people. I get that this is confusing, particularly since I am quite comfortable being on stage and receiving attention. Though, it takes me longer than one night a week for a term to grow closer to new people beyond, “How you doin'?”, or, “Well done!”, particularly with all you young whipper-snappers who all have your own stuff going on! In my particular experience, being repeated is absolutely an extra barrier to closeness with people at my improv level. Indie teams and Cage Match entries seem way less tangible, even though that is not at all true. Though, just one great aspect of this community is that it presents an opportunity in a supportive environment with some awesome people (yeah, you!) to grow past that die-hard habit of self-exclusion. I don't doubt for a second that there are other people just like this within the TIC community. In fact, I'm sure I am witnessing some people, seniors and juniors alike, actively tackling this. Soldier on, tiger!

So why do I keep going? I have a supportive partner who has had her share of trials and tribulations in her improv journey. There are some awesome people who are always there to insist that it's not an issue and that there is every reason to stick it out. It is fun! It is way fun when it works! The end of term show this term was my favourite experience so far, along with my Level 2 end of term. Through the training, I have undoubtedly gained access to confidence in various areas of my life. My band mates have commented how, as a band leader, my stage banter is actually entertaining since starting improv. Approaching a microphone is not at all an anxious moment. I can connect with the audience, point out the truths in the room, and talk with empathy, rather than awkwardly invent out of trying to 'look good'. And, all of my improv teachers have been spot-on; these moments of connection and honesty do produce some really funny and entertaining shit!

« Previous: Improv and Identity Next: A Rollercoaster of Emotion »