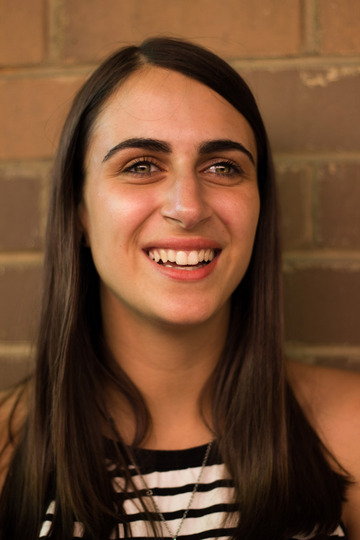 Ashley is an aspiring comedy writer with one nasty rash. Having completed her Arts "degree" at La Trobe University, she is now adding to her HECS debt by studying Screenwriting at RMIT, with the end goal of somehow becoming Amy Poehler's limousine driver. In her spare time she writes plays and sketches with her pals, putting her friends on stage and making them say "butt" a lot.

In June 2015, Ashley left to study abroad at Boston University, focusing on how to perfect the art of writing a completely un-terrible television pilot (while also learning that a) that is quite a difficult/rare/time-swallowing/heart-twisting feat to pull off, and b) she does not like having 5 roommates).

Her debut play "Lump Day" was performed at the La Trobe MOAT Festival in 2015, and her most recent play "Willy" sold out all 5 performances in the same festival in early 2016. Later this year, Ashley will be partaking in the 5 week Summer Intensive for improvisation at iO in Chicago.

Improv has improved her life 147% and she is thrilled to be a part of the wonderful Conspiracy community (also the fact that she can play crazy poop ladies who eat childrens' shoes is also kinda cool).

Come see her perform every Thursday night with her little family of pals, one of The Improv Conspiracy’s newest/cutest Harold Teams, Crown Boy!