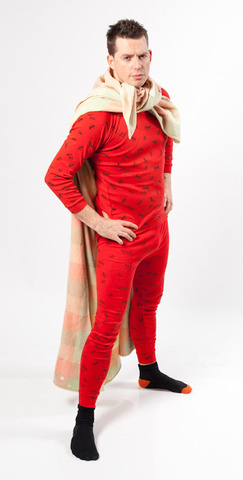 Wyatt has directed award winning shows, performed in award winning plays, toured internationally as a performer and a director where they gave him another award. As a composer his animation was nominated but didn't win, gah.

As the better looking half of Luke & Wyatt (the other one can be found HERE) he has toured Australia doing standup, worked at Nova doing sunday nights, retelling his friend's stories, embarrassing his family, and giving out Jack's number on air (sorry buddy). He is also on air Friday mornings with the Bunch on Mix 94.5, as well as presenting on Nickelodeon and receiving an Astra for his efforts (a foxtel award, not a small car).

As an improviser Wyatt joined the Perth Big Hoo-Haa in 2005, and since moving east side has guested with Full Body Contact No Love Tennis, Impro Australia, and Impro Melbourne.

He's part of this new ImproSketch thing and also part of The Big HooHaa Melbourne.

But he's a humble guy waiting for a chat. come on gang, give him a hug!