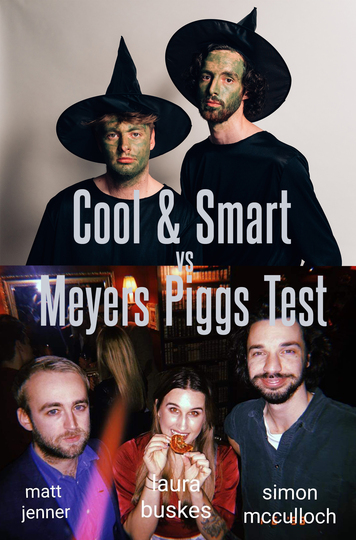 $20 Tickets
(Plus $0.50 Online Booking Fee)
Most sessions offer a 10% early bird discount for tickets booked over 24 hours in advance

During The Melbourne International Comedy Festival of 2021, two great improv teams made it all the way through several heats of the most prestigious improv competition known to Australia; The Tournament of Teams. In the end, they faced each other for the grand title; each team poised to take the thrown, but only one would walk away victorious.

After a grueling 20min of non-stop laughter, "Cool & Smart" was crowned the champions, but did they really deserve this glory? or was something more sinister at play?

Some say that Cool & Smart committed unspeakable crimes in order to win the hearts of the audience, others say they won fair and square and Meyers Piggs Test simply gave a lackluster performance. One thing's for sure, rumours flew left and right, and the sanctity of competitive improv was never the same.

Almost a year later the teams will return to the stage to revisit this controversial match, and this time, it's personal!