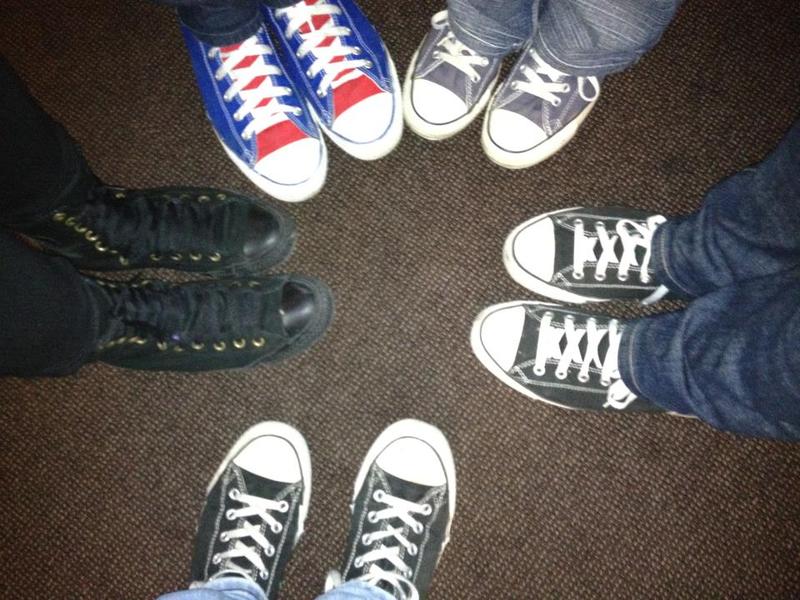 Every Wednesday evening I get on the number 96 tram in the city with all the commuters heading home at peak hour, which is great for people watching. There’s just something entertaining about watching a varied group of people being forced to stand closely to one another and avoid interaction. It’s a perfect opening act into what is sure to be a night of laughter and learning at Improv Conspiracy’s Harold training sesh.

If I’m lucky to get in early I’ll tuck into the excellent pot and parma deal before warming up with the whole crew. Then we get cracking on the details, there is just so much to learn! My brain explodes each week with techniques, tricks and my own realizations. I’m constantly inspired by my fellow players too, I look up to them and try very hard to reach the bar they set. I’d say I’ve been making some progress but I’m not hanging off that bar just yet. And I think I’ve finally realized what’s holding me back.

I don’t have the right shoes.

Well, it’s something I’ve been mulling over for a while but it came to a head last week at the Show and Tell night. I went on last with our Harold team “The Peeping Toms” (formerly known as “Skype with Grandad”, which, incidentally, is not at all related) but all evening I had been distracted by a growing feeling of unease. As each improv group got up I became more and more aware of the trend in footwear. By the time I got up on stage I took one last look at the shoes surrounding me and my fears were confirmed. I stood out. I was the only one not wearing a sneaker. I was standing in a sea of Converse with my poor wellies (gumboots) barely keeping me afloat. I silently cursed my choice of feet coverage and wished I had worn sneakers. Then I realized I don’t actually own sneakers. I had to decide; sink or swim?! I embraced my wellies and ped into my second ever public improvisation! Determined to embrace my differences! Make the most of my quirky/functional footwear! Kick some improv butt! And I didn’t drown. Next month I plan on ping into the deep end once more!

In the meantime, does anyone know where I can buy some Converse sneakers?

Kathleen Douglas started with The Improv Conspiracy since May 2012.  She performed with The Peeping Toms before fleeing the country to spend a year overseas.

« Previous: Exciting times for The Improv Conspiracy Next: How I Met Harold »