How I Met Harold

January, 2011. I'd reached a point in my life where I had to 'do something.' A friend of mine had been talking about a bus tour of New Zealand for a while, so I was like, “Do you know what? Yes. Let's do it!”

Shortly thereafter, I had booked, paid for and sat through the uncomfortable plane rides to New Zealand. Rides? Well, being all the way from WA I had to stop through somewhere.  I was a member of Perth's long standing impro group, "The Big Hoo-Haa!" so I figured I'd make the most of it and pop in to visit our fledgling cousin, "The Big Hoo-Haa! Melbourne." 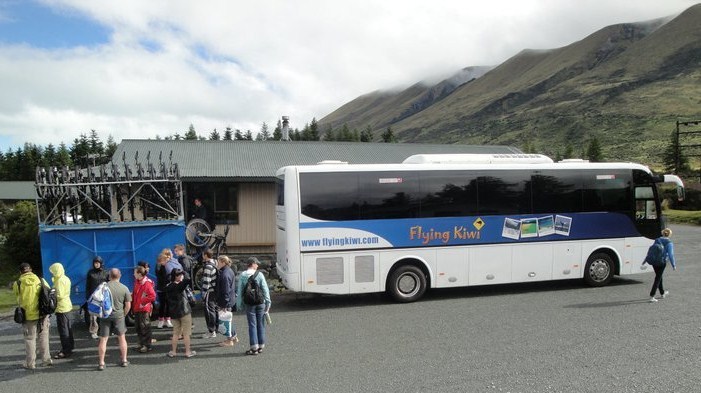 Fasting forward (yes, I think that's right...) and I am in New Zealand, completely the wrong bag fully packed, for what will at times be glorified camping, and I'm part of this bus tour that I really know nothing about. My friend and I get prime seats and I suss out my new companions for the foreseeable holiday future.

So there's our lovely looking Kiwi tour guide - pity about her accent -, a friendly looking group of young Germans, an older couple, a handful of pretty girls and a few weirdos. And there's our token obnoxious American.

Oh yes, there's always one, and he’s clearly been on the tour a few days - he's making jokes and gesturing throughout our lovely (but accentually impaired) guide's welcome. He's obviously under the impression that he's the funniest guy on this bus, but we'll soon see about THAT.

Our bus unloads at our first truck stop and I get chatting to people; I'm gonna be with them for a while so I'm super friendly. After chatting to a girl for almost the whole ten minute break she wishes me luck for the rest of my trip - she was only a random waiting to use the loo. Oh well, back to the bus.

My mate excitedly gets back on and drops a bomb. "Emmet, I just met someone from Melbourne Hoo-Haa!" This is startling. It turns out that lurking within this very tour group is a fellow improviser, who is of course none other than our obnoxious American friend - a guy called Adam Kangas. 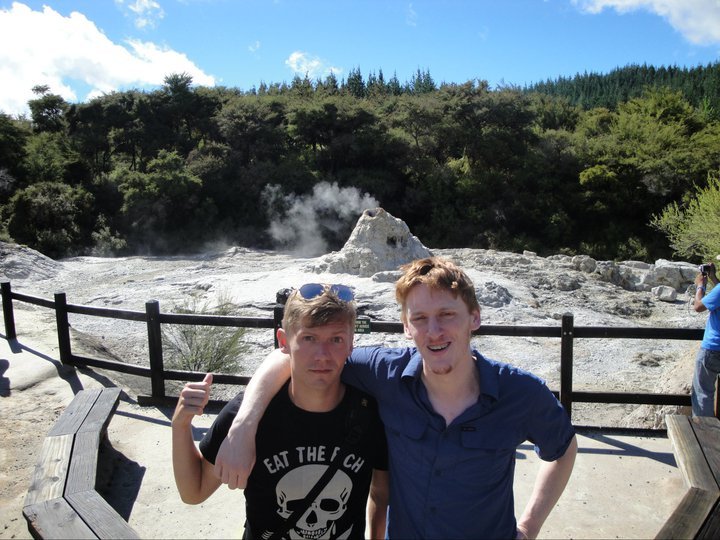 Many drinks, card games, drinks, adventures and drinks later, and Adam and I are great mates. Turns out that while I AM slightly funnier, this guy is alright! As we're a few days into the trip by now we get a nice group together and are all excited about our next expedition - a hike to Mount Doom!

The road to Mordor is actually called the Tongariro Crossing at Mount Ruapehu , but does that matter to us? Of course not, and we've already figured out who get to be the nine of the fellowship, who’s the ring bearer etc etc. We also pack supplies because we know this is going to be a big day - 19.4km, and anything but flat.

Like I say, we are prepared for anything. We've got wet weather gear, warm weather gear, plenty of water - I even managed to make all the sensible food choices (although I was staring at the Party Mix a long time before I eventually chose the aptly named Trail Mix). Adam has even planned music and has a portable set of speakers going - although I feel it pales in comparison to me incessantly humming the Lord of the Rings theme for a good 11km of the journey. Yes, we are prepared for anything. And our shoe of choice? Converse All Stars, of course! 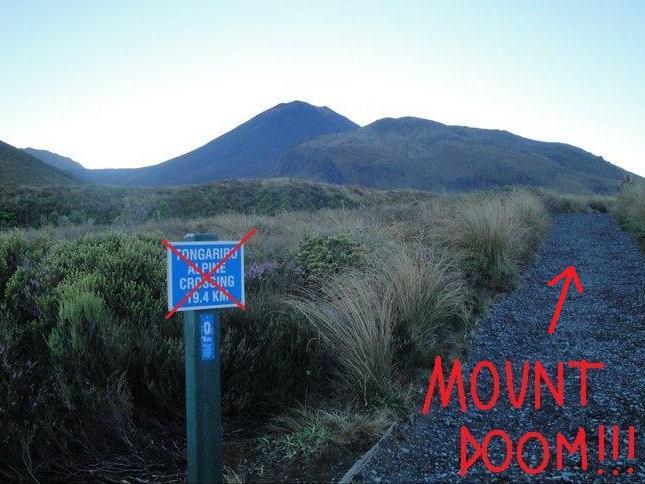 Many blisters, 3 and something hours, 19.4km, a ring (well, a Cheezel) in the fire later, and we are done. And... nothing. No, "You've saved us all from Sauron," or "Congratulations, you did it!" or even a "Welcome back." Nothing. We are very alone, dead tired, and in the middle of nowhere. Parts of us we didn't even know existed are hurting, and for what? And we've made excellent time (no big deal), so most of the group isn't back and will probably be at least a couple of hours (like I said, we made good time. Oh please, it's no big deal. Stop..!). That's when I get a brilliant idea: Slow clap.

Yes! It's the perfect thing! It's exactly what we were missing, and our generosity of spirit means that doing this great thing for others is just reward enough for us!

So when the old couple (nice work, guys!) come trotting up the path, after a 19.3km hike they hear, out of nowhere...

I think that would have made my day.

So we're heading back to our camp for some well earned drinks when Adam and I start talking impro. He tells me about this cool sounding format called Herald. 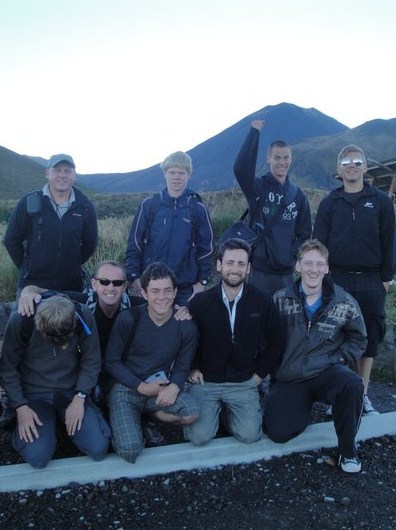 Herald?
Herald.
Or Harold?
Herald.
Is it Harold or Herald?
It’s “Herald.”

Anyway, I had no idea that figuring Harold out would be a LOT harder than a 19.4km hike around Mt Doom...

TUNE IN NEXT WEEK, DEAR READER, FOR PART II:
“First Impressions of Harold”