You're Going To Meet Some People: Quiet Achievers

Today, a special edition made up of two Improv Conspiracy alumni. Between the two of them, Andrew Strano and Charlie Sturgeon have been a major part of the Conspiracy's young life - they have played in Harold Night teams, The Remix cast, coached improv teams, taught improv workshops, and most importantly - have never been afraid to experiment with what improv can be. Together, they currently make up the completely silent improv duo Quiet Achievers, who can be seen at the Tuxedo Cat, 6pm until Saturday. See them tonight as part of the Melbourne International Cage Match Festival, 10pm at the Dan O'Connell Hotel. 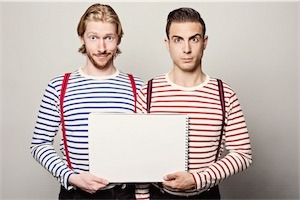 You've both been a big part of the Conspiracy - how did you come to decide to team up and strip all talking out of your show?

[Andrew pulls out a A3 notebook from his bag and flicks to a page that says 'silent improv'. He runs his index finger back and forth under the word silent.]

Do one of you have a cold or something?

[Charlie shakes his head. He opens his mouth wide and extends his right arm out, as if singing a show tune. No noise is heard.]

Alright moving on, what do you do when you want to relax?

Hey we're in the middle of an interview here.

[Charlie makes a motion with his hands to apologise.]

Can I be honest? It's really hard to transcribe an interview when neither of you talk.

[Andrew and Charlie look at each other, shrug. Andrew reaches for the notebook and starts pointing to the word silent]

Yes, yes I know, silent. Alright, what am I going to do.

How about this. Was there ever one particular lesson or note that opened up your mind about improv?

[Charlie makes a zipping motion to his face. Andrew nods.]

So removing dialogue opened your mind up?

[Charlie nods. Charlie and Andrew get up and start demonstrating things without using any dialogue - a Beatles like rock band jamming out, two guys on those street sweeper car things fighting over prized turf, and a couple on a date.]

So I guess the note would be show, don't tell?

[Andrew reaches for an invisible box of cereal and starts pouring it into a bowl. Charlie is rocking a frying pan back and fourth. He reaches into the frying pan but quickly pulls his hand out, wagging his finger while blowing on it.]

So cereal for you Andrew,  and bacon for you Charlie?

Oh ham, got it. What's your favourite pre-show warm-up?

[Charlie start by shaking it out silently, then move into a mirroring exercise.]

If you could have one superpower, what would it be and why?

[Charlie starts flexing his arms ala the Hulk, pretending to punch a wall and moving backwards before it crumbles. Andrew lies down on two chairs and swings his arms out straight in front of his head. He rocks from side to side, pretending to fly].

How do you have so much energy?

[Andrew reaches for an invisible tea pot and starts pouring cups for Charlie and himself. He offers Mike one.]

I'm good thanks. Before we wrap this one up, anything you'd like to plug? The show I imagine?

[Andrew reaches for his notebook and flicks several pages back. He runs his hand over a page that says Silent Achievers. Charlie gives the thumbs up, to which Andrew follows.]

Well, this was more challenging then most interviews but was a lot of fun! Thanks guys!