TRUST, and what we can learn from the 1990s Chicago Bulls
From a lover of improv and a Chicago Bulls fan serving his confirmation bias 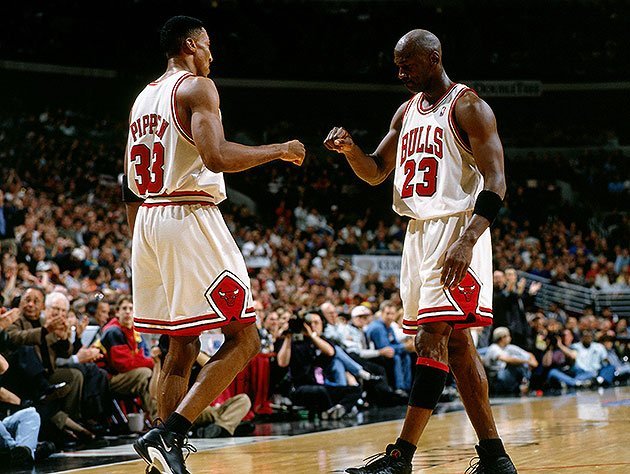 As I was listening to the Jon Favreau episode of Improv Nerd today, he brought up something that engaged me for obvious reasons. Today of all days, on the day my beloved Chicago Bulls were eliminated from the playoffs, he brought up Michael Jordan.

During the late '80s in Chicago the best basketball player of all time entered the league and suddenly the whole western world started paying attention to the sport. Jordan was electric, entertaining and just so damn talented. As Favreau notes - in the '80s, Jordan’s numbers were huge. He nearly averaged a triple double in his first five years around 30 points, 8 assists, and 8 rebounds. For basketball nerds, this is pretty great. But the Bulls still weren't winning. It wasn't until the early '90s when they did some recruitment and brought on a coach who changed the culture and put the focus on the team rather than the individual.

With this shift, Jordan's personal numbers went down, but the team’s went up. As you may or may not know, they went on to dominate the '90s winning SIX championships.

There are many individuals from that era whose names we may know: Charles "Round Mound of Rebound" Barkley, Karl "The Mailman" Malone, Gary "The Glove" Payton, Reggie Miller, Patrick Ewing, etc.  These are still considered some of the greatest players of all time but none of them won championships because they were up against a team they couldn't beat.

It's a snapshot of the Chicago Bulls third title victory. It was Game Six against the Phoenix Suns. It was the lowest scoring 4th quarter in NBA finals history. Only 9 points had been scored in total. All 9 points were scored by Michael Jordan as the Bulls cut the Suns lead down to just 2 with 14.1 seconds left on the clock. If the Suns can stop the Bulls from scoring in those 14.1 seconds, the series goes to a 7th game. But if the Bulls can score, they tie the game with a 2-pointer or win the Championship with a 3-pointer.

On the Bulls roster is a man named John Paxson. Paxson isn't considered a star, but he’s had his share of moments. In 1991 he had a wonderful 4th quarter against the Lakers that lead to their first Title.

This time, as said, only Jordan has scored in this quarter. At the time out, as is noted in the clip, Michael was asked by coach Phil Jackson "Who's open?". Jackson was telling Jordan to serve the moment, not the ego. Serving the ego would be forcing up a shot over defenders to be the hero. Serving the moment would be finding the open man. Jordan could have been forgiven, perhaps, had he decided to take the shot himself. After all, he was the only player on the court who had proven able to score so far in the quarter. However, as you can see in the clip, Jordan finds John Paxson and Paxson wins them another title with a 3-pointer.

You need to sacrifice your ego and trust your team.

John Paxson has talked a lot over the years about how integral it was for Michael Jordan to trust his team on their way to their first 3 championships. How being trusted with those must-go-down shots gave him the confidence to hit them.

How can we better serve the moment?

Are we willing to sacrifice our egos?

The best improviser in the world doesn't compare to the best team. Improv is all about working together to make something you can not make alone. Something you couldn't have created without the group-mind. Solo improv shows are fun, sure... but do they demonstrate the truly wonderful tenets of improvisation?

I'd certainly watch Michael Jordan run some drills alone on the court. It'd be great, but it would really pale in comparison to watching the Bulls work together to decimate some of the best players to ever play the game. Their play was like a beautiful dance

How do we achieve trust with our team?

Scholar and public speaker Brené Brown says that originally she believed trust was built through grand gestures, but through research discovered that trust is built in very small moments.

Some highly achievable small moments in improv include:

When trust is present we achieve our best work.

“Trust is choosing to make something important to you vulnerable to the actions of someone else." - Charles Feltman

We make every idea we express in an improv class or show vulnerable to the actions of our scene partners. No scene is wholly one performer's creation. We need each other, so we have to trust each other. Why are you being so judgmental? You don’t want to lose the Championship to Charles Barkley, do you?

If you step out with me to do a scene without hesitation, I’m jazzed. My energy lifts and I feel you there with me. I know you’re on board with my idea before I've started. We're together in this moment.

Sometimes I'll say something that will startle my scene partner, and they become silent. I could freak out in this moment and ramble to explain myself, which would kill the moment. Or I could trust them and wait, sitting in the moment for awhile to give them the space they are asking for. If I allow them that moment, they are likely about to knock my socks off with their next line of dialogue.

I've seen a team made up of reserved, quieter players do amazing shows by trusting and supporting each other in every moment. This makes the team loud, bold, and hilarious while each member contributes equally and are fully trusted by each other.

When trust is lacking the work suffers.

"Distrust [is when] what I have shared with you, that is important to me, is not safe with you." - Charles Feltman

Have you felt distrust in scenes? Those scenes where you could slice the fear with a knife as a scene partner spits dialogue with you in a "you better understand this or I'll be upset" way? What a moment killer. What a judgment inducer. Right?

I have experienced distrust when I've stepped out to initiate and felt the hesitation of my teammates to join me. It's stifling. I wasn't judging my idea... but now that I'm on stage alone you'd better believe I've started judging every word out of my mouth. I can't do my best work in this space. I'm no longer present.

I've watched great performers lose trust in their team and try to do the show themselves. I've felt a lack of trust from teammates speaking over me in fear that I wouldn’t "yes and" them in the way they wanted the story to go.

I've certainly made mistakes myself. I've not trusted scene partners in the past. While trying to overcome my judgement of their ideas, you bet your life they felt the lack of trust. They were made to realise that what they shared with me, which is important to them, was not safe with me. Neither of us were in the moment, and golly the resulting scene sucked. This is my fault. Not theirs... I’m the one that didn’t trust their idea.

I go through lots of little obsessive phases with improv. They are mostly tiny things I focus on for awhile like forcing myself to stop opening fake bottles of whiskey on stage. Right now, trust is on my mind. I notice it all the time. The performers who impress me the most are those I can see trusting their team. Not the loudest or “funniest” or boldest, but the ones who are present in every moment giving the show and their team and the moment what it needs.  They are Michael Jordan in the final 10 seconds against the Suns in 1993. They are serving the moment, not their ego.

Next time you’re looking for a joyful improv moment, don’t make it all about you. Instead, ask yourself who’s open to share it?

Broni Lisle is the Education Director as well as a performer, instructor and coach with The Improv Conspiracy.

« Previous: AAA Rated Patterns Next: A Love Letter To My Bra – Thank You Crown Boy »