How to make a movie during lockdown 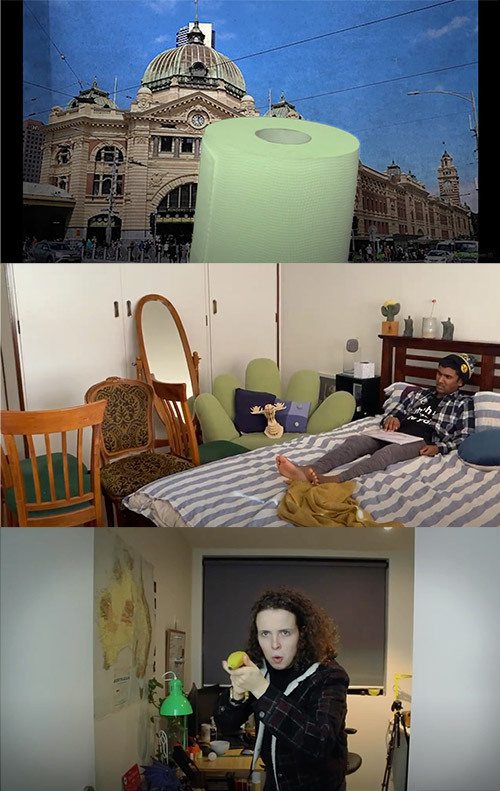 Being confined to your house during a global pandemic isn't exactly the most productive environment if you want to make a movie, but in August 2020, the community members of the Improv Conspiracy Theatre set to work and pushed all their creative gears into motion to put on the first ever “Home Made Film Festival”; a short film festival dedicated to making films within a 5km radius of your house, under Victoria's Stage 4 lockdown restrictions.

The festival was a call out to a community of creatives which asked them to make something tangible whilst in lockdown. The added challenge was that they had to make it in just one week and include specific props, actions and dialogue in a unique and imaginative way.

Many of them had never made a film before, let alone in the short timeframe assigned, but even with all the hurdles in front of them, the result was a truly beautiful collection of funny and heartfelt movies, and while all of them were amazing in their own way, they were also put to the test of being critiqued by a panel of judges who selected winners under a few categories:

- The Story Award (for best narrative idea)
- The Lockdown Award (for most creative workaround of the Stage 4 restrictions)
- The Solo Award (for highest achievement by a single filmmaker, not a collaboration)
- The Innovation Award (for most imaginative use of the guidelines)

The winners of this festival weren’t all super experienced movie makers. Some of them had barely touched a camera or an editing suite. That being said, they still produced some incredible results that were a joy to watch by all.

We had three 3 films take away the winning spots:

They have since had their films put up on The Improv Conspiracy’s social media channels (as well as winning a few prizes for their efforts), and in light of all the restrictions placed on them, we asked them a little about their experience and what got them over the line.

Tell us a little bit about yourself and your filmmaking experience

Aran and Samara: “We had never made a video before so it was a bit of a learning curve but it was a fun way to spend our weekend (even including the couple of debates on who was the better director we had at the beginning of the process)”

Alice: “I'm a current TIC student and extremely amateur film maker. I have always enjoyed making videos as a fun lil hobby. Some classics include 'that parody music video for that uni production that people moderately enjoyed', 'two people sitting on a desert island for 10 minutes saying nothing', and 'plasticine moving around and changing shape with no plot'”

Millie: “In 2013, I won the Critics Choice award at my Year 12 Media Night and have been riding that wave ever since.”

Matt: “I made some short skits about zombies as a teen starring my grandfather, we still talk about it at Christmas.”

What made you interested in being part of the festival?

Aran and Samara: “We wanted to be a part of the festival because it gave us the opportunity to make something fun and use our creative muscles that we haven't used for a while. It was also an interesting challenge to try and make a short film under the restrictions of lockdown and only collaborate with each other on a project.”

Alice: “It seemed like fun! Also having a one week deadline meant having to actually just get up and make something. Frankly, without deadlines I would never achieve anything”

Millie: “House Sketch night was taking a month off and I wanted something to keep my brain occupied before it starts the thinky thinky.”

Matt: “I just finished taking sketch level one and watching House Sketch each month had me keen to get involved!”

How did you find the overall experience?

Aran and Samara: “The overall experience was really good! We had a lot of fun coming up with the idea, writing it then shooting and editing the project. It was time consuming but a really great way to spend a week. As I mentioned earlier having two directors and no clearly defined roles was challenging initially, but we decided to shoot every idea and then decide in the editing which take we'd use. It made the process more interesting and collaborative because we were both heavily invested and happy with the end result.”

Alice: “I think the prompts and criteria for the film, along with the need to adhere to stage 4 restrictions, were actually really useful in terms of providing some loose boundaries within which to brainstorm ideas. There were some challenges in the film making process though, not the least of which was the judgement from housemates and neighbours as I slowly moved a roll of toilet paper around the driveway and filmed it.”

Millie: “The main challenge was the tight turn around of just a week. With House Sketch you get over a month to refine an idea, shoot and edit - so being alright with ‘it’ll do’ was my main hurdle. Matt is a natural on camera, so all of his stuff was excellent.”

Matt: “Since Millie did all of the editing and directing, I felt very lucky to be free to do the fun and silly things, like figuring out how to make a shotgun out of bananas.”

Aran and Samara: “Our creative process started with making a list of ideas, then wittling it down to the best ones. Then it was just an ongoing discussion of where the story should go, and using a veto system of things we didn't like to cut them down.”

Alice: “I'm pretty methodical. I like to have a fairly detailed plan before I start, particularly with stop-motion. For this film I did create a storyboard, including rough notes on the number of frames required for each shot. If you're feeling glum in the next few weeks or months of pandemic life, picture me at my desk at 2 a.m. on a Saturday night furiously sketching pictures of a toilet roll. Yep.”

Millie: “While typically known as a crazy bitch who’s up for anything, I do like to plan. Once Matt and I wrote the script, I made a shot list to make sure we got everything we needed in the shoot. Having that sorted allows lee-way in the editing phase for adding some off-the-cuff dank stuff.”

Matt: “For the idea generation, writing the script, and making the props, it was fun just bouncing around dumb ideas and seeing what makes us laugh the most. Millie took the lead for a lot of the production so I was lucky in that all I really had to do was follow instructions!”

How did the Stage 4 restrictions impact your creativity?

Aran and Samara: “Stage 4 restrictions has been both good and bad for creativity. Having more time has been good in being able to work on things, but the ongoing existential dread, hopelessness and lack of world experiences made it a bit difficult. For this project though it was good because it gave us a solid activity to do for a weekend, and we probably wouldn't have been able to spend as much time on it if we had the ability to leave the house for more than an hour at a time”

Alice: “I wouldn't say lockdown has made me more creative, but it has definitely made me less sane. That's basically the same right? For this project, if anything the restrictions were helpful because they forced me to work with the objects I had around me. I don't think in normal times I would have thought of anthropomorphising a roll of toilet paper. So thanks covid!”

Millie: “While I miss the chaos of live sketch, it’s been nice to make stuff that will have a lifespan beyond one night. The filmed content coming out of the TIC community (Dirt & House Sketch etc) has been sick, and having time to work on my own editing/filming skills has been super rewarding.”

Matt: “It's also really easy to lose steam and inspiration stuck at home in Stage 4. The requirement of a tight turnaround for this made it pretty perfect for getting out creative energy and actually making something!”

The videos are available to watch via our YouTube Channel

Laura Josephine is the Theatre Operations Manager and Assistant Artistic Director of The Improv Conspiracy Theatre. She took her first class here in early 2013 and has been involved teaching and performing ever since.