This is a post in our "Five Questions" series of interviews with Improv Conspiracy members.  During the 2013 Melbourne International Comedy Festival we'll be posting a new interview on every day that we have a show, and on a few other days when our Artistic Director is bored!  You can find out more about our show "Our Friend Harold" and buy tickets by clicking here! 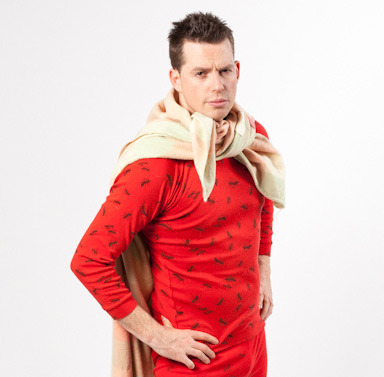 What was the first improv you saw that made you think "Wow, I'd like to do that!"?

I think the first impro I saw was The Big HOO-HAA! in Perth. I was already doing standup and there were a few comedians who improvised onstage, but it was different. Having other performers respecting your idea and helping build a shared imagination is something really inspiring.

The most rewarding parts of Harold for me are also the most challenging. The third beat- trying to thread ideas and concepts from what's gone before all together is especially challenging, and can be so rewarding when you feel the whole group is thinking as one. So yeah, hive minds... that's what I find difficult.

I'd like us to be capable of SHOWING UP ON TIME amiRIGHT!?

Seriously, I'd like for us to get more of that collective consciousness and be able to leap boldy into impro where no one have been before, and come out the other side having made it awesome.

I think this is the hardest question. I think that I am so inspired by all the players from the 4 teams- everyone brings their own special skillset and imagination to the stage. I like the idea of teams but I liked even more playing with players I haven't played with before- so guesting with the Wrong Shoulder was a real treat.

But if it comes across as lazy me not having some crushes, fine: crushtown ahoy!

Jack Smith for his economy of language and ability to setup an idea with extreme clarity in one line.

Scott McAteer for his chameleon like ability to support a scene by transforming into whatever the scene needs and always remaining grounded.

Adam Kangas for taking his post show ramblings about this "harry thing" and building four awesome teams and a community of excited supportive impro players.

Well i reckon that the attitudes of impro, specifically being an encouraging and positive energy, is something that I naturally did in my social life anyway, and impro allowed me to name and understand that energy, as well as give clarity as to its effects. Mind you I have to stop saying "yes, and" when friends say "lets do some CRIMES".

Wyatt Nixon-Lloyd has been a part of The Improv Conspiracy since our very first trial workshop in October 2011. He performs with the teams NASA Dropouts and Watergate.